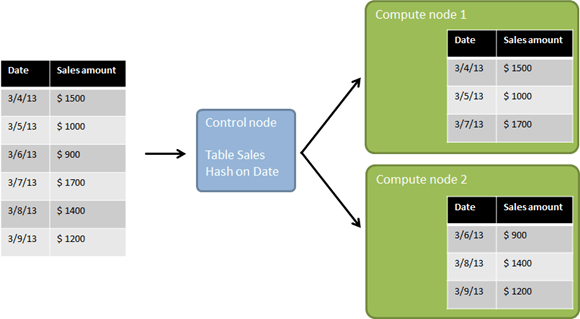 The table DDL statement would look somewhat like this:

The values in the distribution key column (Date column in my example) are mapped to the distribution using a hash function. The hash function is not a simple round-robin, but takes into account the number of compute nodes and the column’s data type (for example int is hashed differently compared to bigint) and can (currently) not being queried directly. If a scale unit is added to the PDW (therefore bringing more compute nodes into the appliance) the existing data is redistributed and the internal hash function then takes the new nodes into account (different hash values).

So, after this short introduction, let’s get back to the question, what we need to consider in order to find a good distribution key. Please note that I’m saying ‘considerations’, not recommendations or guidelines. The reason is that depending on your data and your typical query work load, you should consider the topics below to find a good solution for yourself.

We’re using the term skew here to describe the situation where some distributions contain much more or much less data than the average of the distributions. If typical queries involve a large number of rows, the power of the PDW depends on the ability to parallelize the query to its nodes. In the worst case, if all the data sits on only one compute node, PDW behaves much like an SMP machine. Depending on the structure of the query (see considerations 2 and 3), the “slowest” compute node sets the time for the query to complete. So, we want all compute nodes to contain about the same amount of data to get the most out of the PDW (not much skew).

You may notice however that I mentioned the query behavior (large number of rows involved). This topic is extremely important and I’m getting back to this with Consideration 4.

Usually, to prevent skew, you would look for an equally distributed column with many distinct values. In my example from above, I used Date as the distribution column. Is this a good idea? Assuming that you have different buying behavior depending on the season, it might lead to a significant skew. So date might not be a good column to base your distribution on. Usually good candidates are fields like order number, transaction number, any kind of sequential counters etc.

In order to show the effect, I’m using a table FactSales with about 9 million rows on a PDW with 2 compute nodes (giving 16 distributions). First, I’m going to distribute the data based on the order number. In order to see how the distribution works, we’re using the PDW_SHOWSPACEDUSED function: 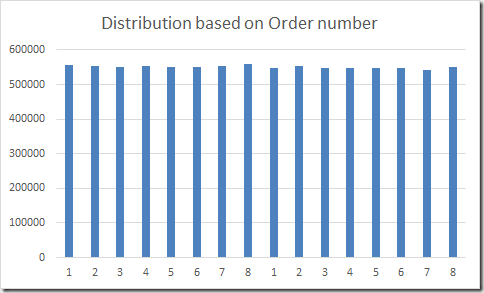 Next, let’s distribute the same data based on the product. Since some products are sold more often than others, we expect some skew to occur. And for the (real life) data I used here, this is true as you can see from the following visualization: 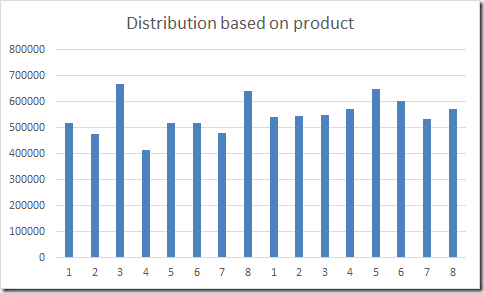 My data also contains the line number (per order). I expect this to be a very bad distribution key because I don’t have many orders with more than 30 order lines. So, here is the distribution per line number: 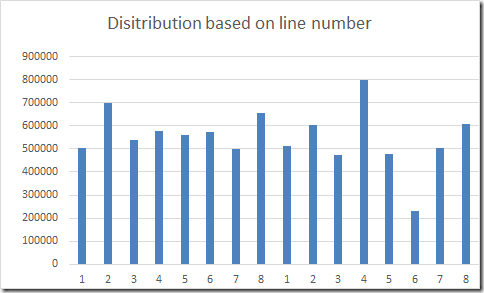 So, you see, that the build-in hash function of the PDW does a great job. However, if you want to reduce skew in order to leverage the full parallel power of the PDW for queries involving a large amount of rows, make sure to choose a column with equally distributed values. Usually you’re looking for a column with a lot of distinct values. As you can imagine, if your distribution key column has less distinct values than the number of distributions, you’ll end up with some distributions having no data at all (bad choice).

For parallelization, our goal is that each node can work on the query independently. For more complex queries however, it becomes necessary to shuffle data between the nodes. When looking at the distribution compatibility of queries, we try to optimize the need for shuffling data between the nodes. In general, a query is distribution compatible if the data resulting from right side of the join sits on the same node as the data resulting from the left side of the join. For a normal SMP machine this is always true, but for distributed tables, if the distribution on the left and right side of the join is based on different criteria, it’s getting more complicated.

First, let’s take a look at a star join, where the join destinations are replicated tables.

Anyway, in this practical case, we know that the rows are on the same machine as each order number refers to an order of a specific date. So one order cannot have two different dates. But this is implicit knowledge that is not available to the query optimizer in order to find a good query plan.

So, in order to get a distribution compatible join between these two tables, we could either

By including the distribution key in the column list for the join we’re letting PDW know, that the grain of the join is truly finer than the distribution, so it can process each the join-operation on each node separately.