A common task in data processing is to fill null values in a table with the latest existing value. For example, look at the following inventory table

Let’s assume we only get an inventory record, if the inventory changes but we want to fill the missing values (for example to create a snapshot fact table).

The final result should look like this with null values being filled with the last existing value:

In Power Query (or “Get and Transform” if you’re using Excel 2016) this is an easy task using the fill-down function, which does exactly what want:

So, how can we get the same effect in T-SQL? We could use a sub query, but in this post I’m using a window function. The idea is to generate row groups for which each row group starts with a not-null value and has a unique identifier. This allows us to use the first_value function for each group to get the existing value for that group.

In order to build the row groups I start with a change indicator for the table values. The idendicator is 1 if we have a balance, 0 if not. The resulting query is quite simple:

The next step is to create a running total over the change indicator. In fact, this running total already defines our row groups. I’m using the sum() over window function here. The query from above is converted into a common table expression (cte) as this is easier to read:

As you see, the number for the row group increments with each existing balance value which means that the first row always contains the number (with the exception of the very first line for which we don’t have a value at all). In order to finalize the query, we just need the first_value function to get the value of the first row per row group: 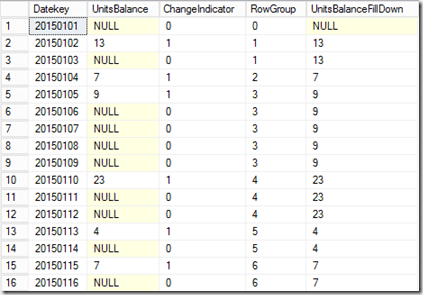 So this is exactly what we wanted (if you remove the columns that we just needed during the process from the final output, you get exactly the result from above).

Hi, this is a clever way of ding this. many thanks.
However, I am unsure if the CASE clause in line 12 is really required. I think it should work with 'first_value' alone. Do I miss something? Tobi

You are right. The case is not really required and the result will also be correct if you online use the first_value (line 13). Hilmar

I’ve been looking for an elegant solution to this issue in sql for awhile now. This is brillant. Thank you for posting this!

I got thrown into a project where I couldn't use Pandas or R. This saved my butt. Thanks!