In a Data Vault Model, Business Keys are used to integrate data. A Hub Table contains a distinct list of Business Keys for one entity. This makes the Hub Table the "Key Player" of the Data Vault Data Warehouse.This blog post explains the pattern for loading a Hub Table. Moreover I will explain the differences between Data Vault 1.0 Hub Loads and Data Vault 2.0 Hub Loads.

The function of a Hub Load is to load a distinct list of new Business Keys into the Hub Table. In Data Vault 1.0 it also generates a Sequence as Surrogate Key. Previously loaded Business Keys will be dropped from the Data Flow.

To explain Hub Loads I am using a well-known example from the Adventure Works 2012 Data Base. The example load is supposed to load product information into the Data Vault Model.

The destination table Product_Hub has the following structure.

Column LoadTimestamp
Time of the Load - This column indicates the data currency.

Column RecordSource
Source of the Record - At least it needs the source system. But also you can add more specific values like the source table. The column could also contain the name of a business unit, where the data was originated. Choose what suites your requirements.

The Data Source is the table Product.Product. This data will be loaded without any transformation into the Stage Table Product_Product_AdventureWorks2012. The Stage Load is performed by a SQL Server Integration Services Package.

From the Stage, the Hub Load Pattern is used to load the data into the destination table.

The following T-SQL and a SSIS implementations will illustrate the concept of Hub Loads.

In this example a stored procedure  Load_Product_Hub  represents the Hub Load Pattern. To generate the Surrogate Sequence Number, the procedure is using a SQL Server Sequence.

Creating a Sequence in T-SQL

The stored procedure Load_Product_Hub shows how the load pattern could be implemented in T-SQL. 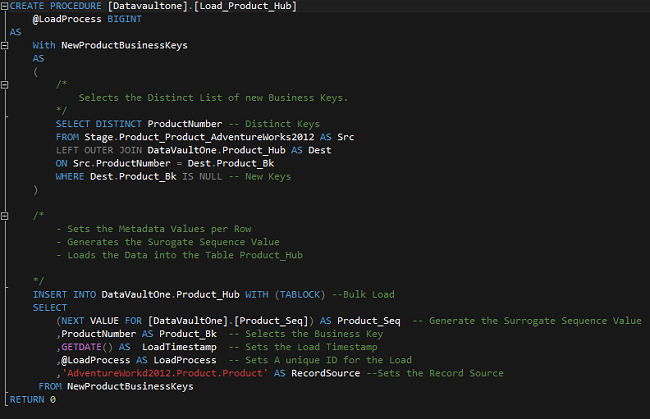 The command NEXT VALUE FOR gets the new Sequence Number for each row.

When we model Data Warehouse Loads, we want to use an ETL Tool like Microsoft SQL Server Integration Services.

This sample shows how the pattern can be implemented in Integration Services.

Generation of a Surrogate Sequence Key when using Integration Services

Recommendation
To avoid this behavior I recommend using a Sequence in a Default Constrain on the destination table. The benefits of a Sequence is that you do not have to deal with Key Generation within your ETL. Leave this task to the database. Keys are independent from the loading process. This makes it possible to exchange the ETL Process or the ETL Tool if that is necessary. The Sequence keeps incrementing also when the table gets truncated.

Using the Sequence as a Default Constrain on the destination table

Every new row will get a new Sequence Number by default. But still you can set the value within your ETL Process, if that is needed.

The main difference between a Hub Load in Data Vault 1.0 and Data Vault 2.0 are Hash Keys.

Hash Keys are a controversial topic. It is true that collisions can occur when using Hash Keys. On the upside, using Hash Keys can solve issues with late arriving data. More importantly they can increase the load performance of the data model significantly. They enable to load the data full parallel into the Data Vault Model. This can be achieved because the Business Keys are the base for the Hash Keys.

But pros and cons of Hash Keys should not be the matter of this article. In later posts we will investigate how Data Warehouse Loads can benefit from Hash Keys.

The load pattern for loading a Data Vault 2.0 Table is basically the same like in Data Vault 1.0. Just the Surrogate Sequence Key Generator gets replaced by a Hash Generator.

In Data Vault 2.0 Hash Keys replacing sequence keys. Therefore we have to modify our data model a little. The Product_Seq column has to be replaced by a column Product_Hsk. Using different suffixes here helps to differentiate Data Vault 1.0 and Data Vault 2.0 tables. The Data Type of the column has to be changed as well. It is recommended to use a Char (32) field to store a MD5 Hash Key.

Generating a MD5 Hash Key in T-SQL
To implement the modified Hub Load Pattern a Hash Key Generator is needed. In T-SQL I have implemented a custom function that returns the Hash Key of a given Business Key. The function is using the SQL Server HASHBYTE function to generate the Hash Key.

In the Procedure Load_Product_Hub the “SQL Server Sequence - Call” has been substituted by a call of the new Hash Generator function “GetHashKey”. 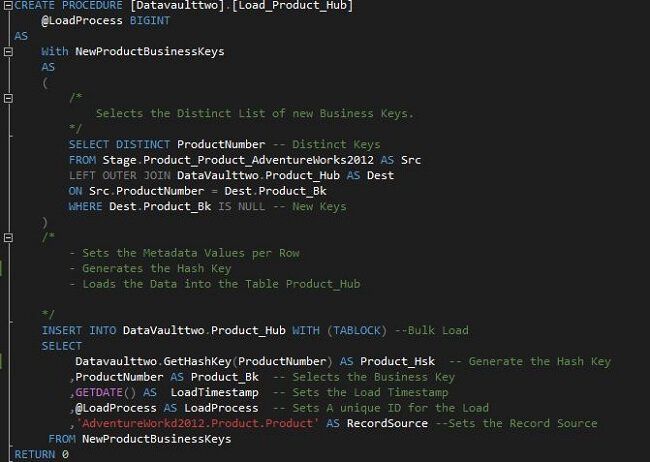 In SSIS the Data Flow Task has to be extended by a Script Component that generates the Hash Key. 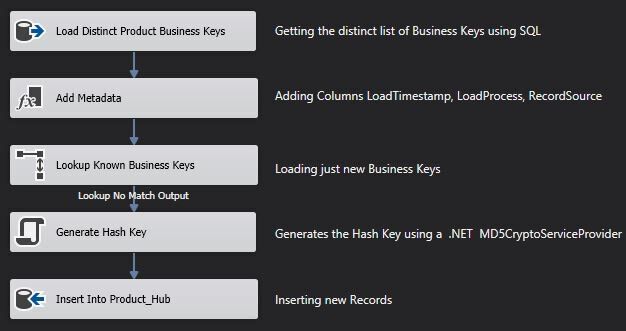 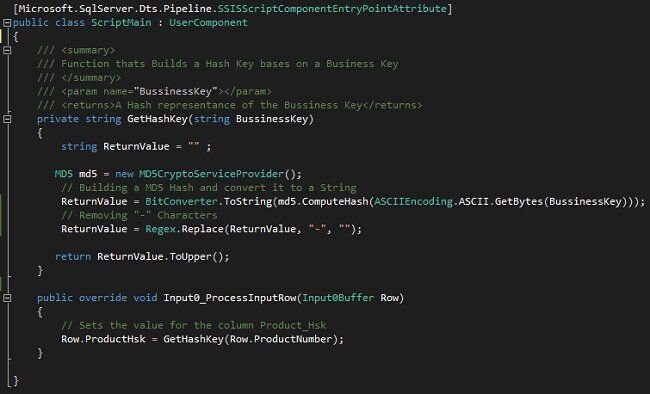 The script is using the System.Security.Cryptography.MD5CryptoServiceProvider to build the MD5 Hash.

A Hub Load is a simple pattern, which can be easily repeated for every entity in the data model. This is one reason, which makes the Data Vault Model so scalable.

Because Data Vault Loads are standardised, they can be generated and developed with a high degree of automation. As a result, Enterprise Data Warehouse Projects can be developed more agile and fast.

Do you have any patterns for loading Satellites and Links

If you have any specific question you are welcome to send an email.

In this blog, you explained single hub load process.I want to load all the hubs at a time. Is there any way to do this.

There are ways to load all hubs at a time. You need a propper ETL Tool like SQL Server Integration Services. This alows you to run multiple of this single pattern in parallel. How many of this pattern you can run in a time is limited by the performance of your infrastructure.

This is a nice overview, but please - next time you put my training materials on the web, please reference the source (ie: me).

Also, note that your pattern for DV2 load is not "quite" right - you put the hash key computation on the way to the Hub, this is too slow for most systems. The hashes are computed on the way IN to the STAGING tables, not on the way to the Data Vault.

On another note, I did enjoy your article, it was concise and clear. Nice Job! :)

To all others, I do cover these aspects and all the patterns in their complete and full notions in my Data Vault 2.0 boot camp class which will be available on-line very soon at http://KeyLDV.com

20.08.2015
Dealing with Hierarchies Part 3: Historisation of hierarchy-structure
Blogbeitrag
100%
Historisation of hierarchy structure is not required in all projects especially not from the beginning. But most of time it’s too late to implement it afterwards because…
END_OF_DOCUMENT_TOKEN_TO_BE_REPLACED
20.08.2015
Dealing with Hierarchies Part 2: unknown members in an unified hierarchy dimension
Blogbeitrag
100%
When unifying master data und hierarchy structure you have to take a minute to think about your unknown members and how you distribute your surrogate key. I believe it’s useful…
END_OF_DOCUMENT_TOKEN_TO_BE_REPLACED
18.08.2015
Dealing with hierarchies Part 1: One or two dimensions for master data and hierarchy structure
Blogbeitrag
100%
Dealing with Hierarchies is not always the easiest task in your datawarehouse. There is a series of questions in regard to dimensional model, unknown-members, historisation, and…
END_OF_DOCUMENT_TOKEN_TO_BE_REPLACED
24.03.2015
Data Vault - Agilität und Skalierbarkeit im Enterprise Data Warehouse
Blogbeitrag
100%
Data Vault ist eine Modellierungsmethode  und Vorgehensweise  welche sowohl agile als auch skalierbare Enterprise Data Warehouse Projekte ermöglicht. Der Schlüssel hierzu bildet…
END_OF_DOCUMENT_TOKEN_TO_BE_REPLACED