In an earlier post I wrote about handling different granularity in a dimension-fact relationship. This time I want to get back to this topic from the end-user perspective. To illustrate this, I use a very simple data model here: 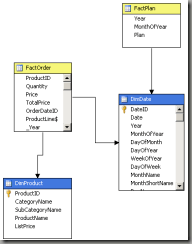 For this model, we have daily revenue data and monthly revenue plan data. Here is the link from the measure groups to the dimensions:

In this example, both measure groups only have one measure: revenue. Since measures are a dimension of its own in the cube, measure names have to be distinct, so I named the measures “Revenue” and “Plan Revenue”.

If your cube contains more data from other measure groups, things can soon be getting confusion with many measure groups. This post is about two common solutions in order to reduce the number of measure groups here.

Before we start, one remark. The last post was about using translations in the cube the add more flexibility regarding the naming of the measures. Since the measures are clearly associated with a measure group you could be tempted to use the same name for both measures (which is possible for translations). This is how the result would look like in the cube browser: 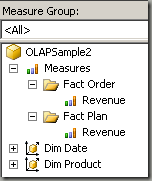 However, when using a Pivot client like Excel you usually don’t see the measure group anymore. A simple analysis could look like this: 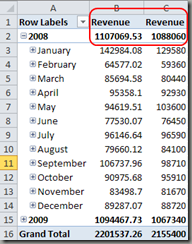 One possible option is to add a calculated measure the the Revenue measure group. In order to do so, I renamed the plan revenue to “Plan Revenue Internal” and set its visibility to hidden. Then the calculation could be as shown below: 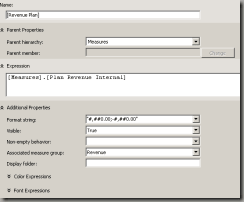 This is how the cube looks like in the cube browser: 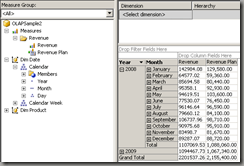 By “copying” the plan measure into the revenue measure group you only have one visible measure group left, while both values are still separated by the name.

As I started the post about the different granularity, how does this look like at the detail level? The following screen shot shows the date dimension at the day level: 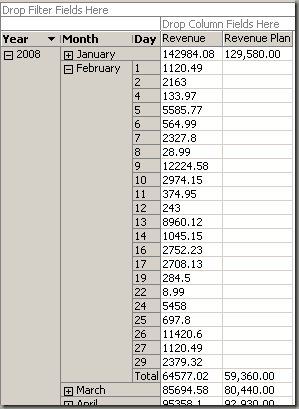 Assuming you have set the “IgnoreUnrelatedDimensions” property of the plan revenue measure group to false, only actual values are displayed here, no plan values. So this approach works really well. 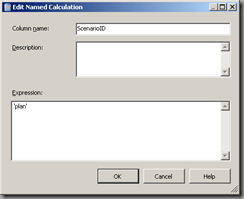 The fact tables are linked to the scenario dimension in the data source view: 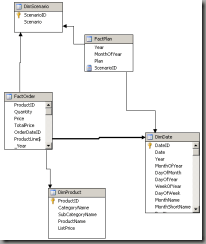 The scenario dimension should be set IsAggregatable=False (as it makes no sense to aggregate actual and plan data). Also we should provide a default element. This is shown in the screenshot below:

For the cube, we only want to have one single measure revenue which is neither of the two existing measures. Therefore we make both existing measures invisible. In order to distinguish them from visible measures, I prefixed them with an underscore: 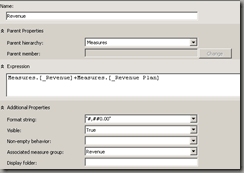 Choosing this model for implementing the different granularity, the cube shows only one measure: 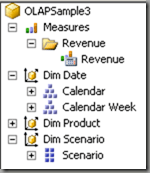 If you compare this screenshot with the one from above you will see the same values, only the presentation is a little bit different (first option had two measures, last option one measure and a scenario dimension).

Both options shown here enable us to have the same measure in two or more measure groups of different granularity. The second option with the scenario dimension looks a little bit more tidy from a technical perspective. However, sometimes the first option is easier to use, especially when you add other calculated measures with formulas that are combining two or more scenarios (for example a measure like ‘Actual to plan ratio’). For those measures it’s not possible to assign them to one scenario. On the other hand, choosing the scenario dimension can dramatically reduce the number of visible measures in your cube, which makes the cube easier to understand for end-users. So depending on the requirements and the structure of the data, one of the two options will be the best to choose. 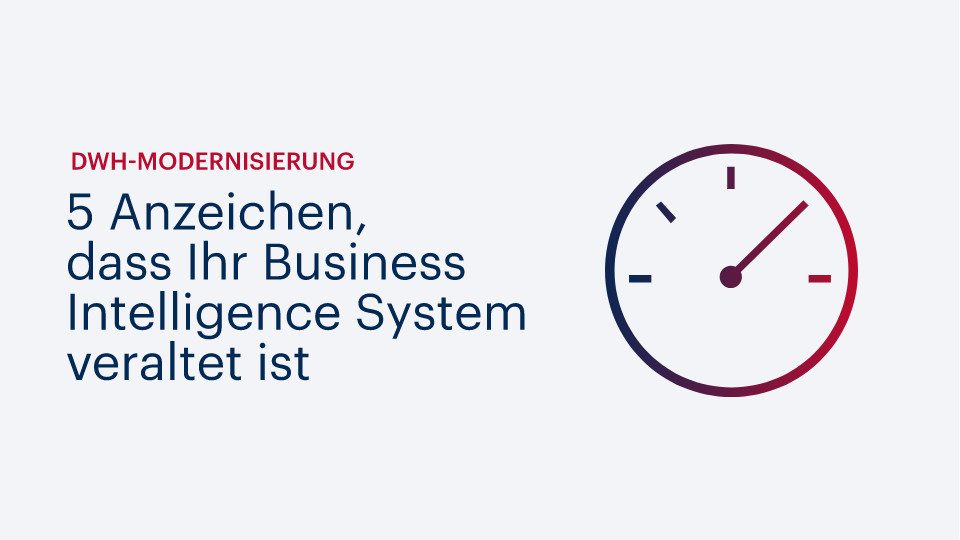