A different approach to modeling units

While units are a built-in functionality in some OLAP databases, we need to take care of them in SSAS on our own. Usually I model units as a dimension so that the facts are linked to the unit they belong to. However, units usually must not be aggregated (like adding up meters with liters), and therefore we would set the IsAggregatable property to false. The user first has to choose a unit before the result is displayed. In some cases this may not be that clear. For (local) currency for example the values are aggregatable as long as the currency is consistent which may or may not depend of the currency unit. As long as the selection (no matter of how the filtering was done) leads to a single currency it would be possible to display the result in local currency. Whenever there is more than one currency involved, the result cannot be shown.

Taking the usual approach with the non-aggregatable unit dimension you may find a situation like below:

So everything’s fine with this approach. But usually we don’t analyze by currency and if we simply put it on a filter, we might miss values of the other currencies like in the following screenshot of the same sample cube (the value for ‘Other’ gives no hint that there might be other sales here too):

So the idea could be to tell the cube to display the currency values as long as the displayed cell contains only one currency unit. For other cells we can only display a warning. The following screenshot shows the final result:

To explain how this can be done, let’s first look at the model of our sample cube: 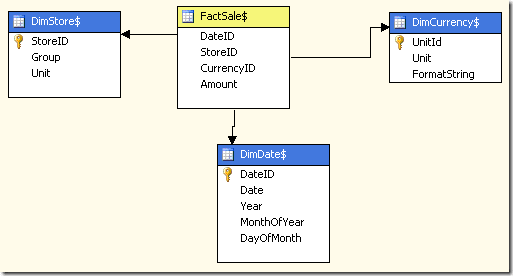 The currency unit is linked to the fact table using its primary key UnitID. For the cube we include this key is a measure to the cube… hey, this sounds weird, why should we use the surrogate key as a measure?? Well, we even use it twice, once aggregated by the Min function and one aggregated by the Max function.

As you can see we also take the format string (e.g. “$”#,##0.00) from the currency table to display each currency properly.

For the above screenshot I modified this code a little bit and returned the value 0 instead of NULL. I also used the text “multiple units” as the default format string for this value 0. I prefer the NULL value though as it is “more” accurate.

As long as you’re using Excel 2007 compliant format strings (as describe in one of my previous posts ), everything should display properly in Excel too as shown in the following screenshot: 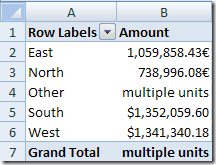 Other clients can also leverage the formatting defined in our cube. For example in Reporting Services you could use the above formats if you refer to the FORMATTED_VALUE property instead of the VALUE property. So instead of

Here’s a simple report based on the sample cube: 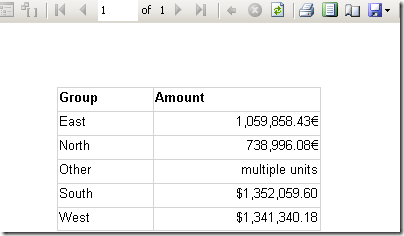