How to create time attribute relationship (2)

Building your time attribute relationship you have to consider the following questions:

When building up your time dimension, you should

Below is an example of a date dimension I recently used. Keep in mind though that this is just an example. You might not need an ISO week or quarters (I usually try to avoid them...) or you may even want to see semesters or incorporate a manufacturing calendar.

Of course this is just one way of doing it and you might start using this approach and finetune it to your needs later. You may notice that I used the same source columns as names for fiscal month and month (and other related attributes). This is done in order to provide different keys for the fiscal periods in order to sort for example the months accordingly. For the standard calendar you want to see your months as January, February, ..., December while for a fiscal calendar with a fiscal year start of April 1 you want to see the fiscal months in the correct order April, May, June, ... December, January, February, March. The separate attributes allow different keys and so the sorting is not complicated.

You will also notice the ISO Week / ISO Year attributes which I've included for the European countries. I'll give some more information about this in a later post.

In this situation you could build natural hierarchies like the following ones:

The following screenshot demonstrates how you can leverage the atttribute relations for example in Microsoft Excel 2007: 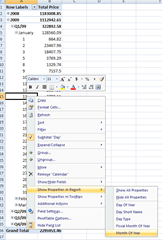 Here, we simple display some more attributes alongside with the day information.

If you've struggled with date dimension attributes and relationship too like I did, I'm very interested in the ideas you developed for setting up your date dimension and I encourage you to leave me a comment.