A duplicate attribute key has been found during processing (revisited)

This blog post is my 100th post here and I’d like to say a big thanks to all the readers and supporters of this blog. Reason enough to concentrate on a very popular topic from my past blog posts.

Back in 2009 I wrote about the typical cases for the duplicate attribute key error in SSAS. From the response I got to this post this is still a very common error message causing confusion. Reason enough to revisit this topic and complement my last post with three new variations. Thanks for all the comments, as two of the cases are taken directly from the comments on my previous post.

Solution (identical as in reason 1): Try avoiding those NULL values in your data source (for example by using a DSV query and the T-SQL coalesce-function). When your source data is a data warehouse it’s also a good practice to avoid null values as they complicate the queries to the data warehouse.

Solution: If you can, use the same collation type on both sides. If not, you could access the database table using a view that changes the collation or change the collation for the SSAS key column(s).

Reason 6 (not very likely): Your using the translation feature of the Enterprise Edition and for a certain attribute key you’re getting more than one translation.

Solution: Make sure that the translations are consistent (from the view-point of the attribute key)

In order to produce this error, I used a table with a numeric (int) column. The following rows are present in the table:

When you try to process the dimension, you get the duplicate key error:

Errors in the OLAP storage engine: A duplicate attribute key has been found when processing: Table: 'dbo_DimTestNull', Column: 'Key', Value: '0'. The attribute is 'Key'.

If you check the details for the key column you see that NullProcessing is set to Automatic (which is identical to ZeroOrBlank in this case, see long explanation here ).

When reading the dimension, SSAS runs a SQL query similar to this one:

Now, with NULL being converted to the number 0 this results in two rows with the same key for a column that is expected to contain distinct values. This causes the error.

As with reason 1, having NULL values in the data warehouse is not a best practice as they cause problems not only with SSAS processing. So, it’s best to replace the NULL values in ETL and to define all colums as NOT NULL.

A tricky thing with this error is, that it might not occur on a process update. So, let’s assume your dimension contains only a row with the value 0 and processes fine. Then, sometimes later, a row with a NULL value appears. Since you’re still doing a process update, the error will not occur! After a while you try to full process the dimension and now you see the error message from above. This can be very confusion especially if the reason for the full process is a major change to the dimension (so you suspect this change to be the reason for the error).

Let’s assume we have a very simple source table for our dimension:

SSAS uses this query to get the values for the attribute’s key:

If you have a case insensitive collation (like SQL_Latin1_General_Cp1_CI_AS, CI=case insensitive) on this column in the relational database, the result contains only one row (in my case with the lower a). However, if you have a case-sensitive collation (like SQL_Latin1_General_Cp1_CS_AS, CS=case sensitive), you’ll get two rows like this:

You can see the collation for the column in the column properties in SQL Server Management Studio: 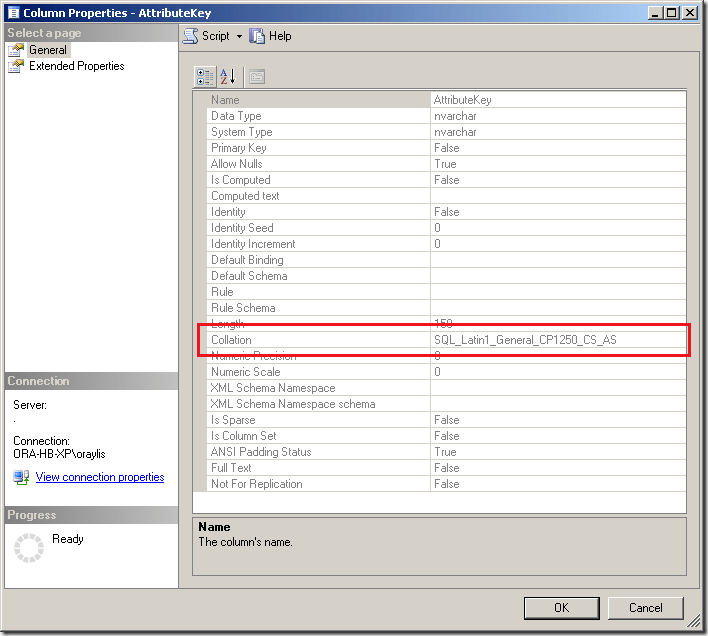 Since the CS in the collation means case sensitive, SQL Server treats the entries a and A as two different values.

Now, let’s have a look at the SSAS collation. You can find this setting in the attribute’s key column:

A blank entry (“none”) means the default collation. If you click on the ellipsis, you can see the details of the collation and make modifications for this single column: 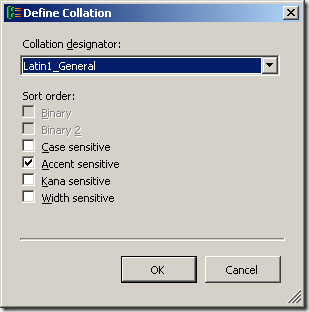 In my case, the default collation of the SSAS database is set to Latin1_General, case-insensitive.

Basically, to fix this error you have two options:

In detail, you may go for one of the following changes:

This is a variation of case 3 of my previous post. If you’re using translations, they are handled like the Name property of your attribute and therefore they also have to be consistent. Take a look at the following table:

I’ve created an attribute that uses EnglishName as the key.

This works fine. By default, the key column is also used as the name column.

Now, we’re setting up a translation that uses the column GermanName as the translation for this attribute. Now, EnglishName is still the key, but GermanName gives two different results for the key value “Summer”: “Sommer” and “Fällt aus”. This causes the error. If you replace the German translation in line 5 with “Sommer” the dimension processes correctly again. In general, this error is very unlikely, because usually there will be some kind of translation table providing exactly one translation per original row. It still can happen, since I recently saw this in a project of mine.